He was in 1865 a member of the honourable corps of gentlemen-at-arms, the monarchs official bodyguard, formed in 1509 they are still going strong. 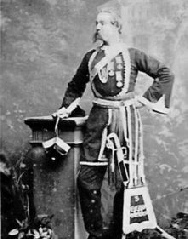