Originally buried at West Norwood Cemetery (Grave GM-15950), London, reburied in 1977 in South Africa after his overgrown grave was rediscovered by his great-grand-nephew Professor JFV Phillips

On 12th August 1857, he led a charge on a redoubt in an entrenched village whilst under heavy fire 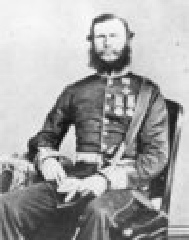