Place Of Death   At his home, Dolaucothy, Dyfed, Wales

Legend has it that he was murdered by his butler who was refused a public house license, Hills-Johnes being the JP who turned him down

At the Siege of Delhi, on 9th July 1857, he gallantly charged an enemy column that was attacking his position. He was brought down by sword wielding Sepoys and rescued by 136 Tombs 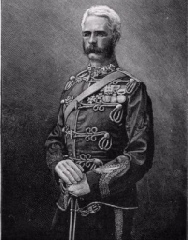