Portrait by Emma Wesley at the National Portrait Gallery, London

In March 2011 he made the semi-final of Dancing on Ice.

In July 2011 he was awarded Honorary Degree by the University of Sussex by being made a Doctor of Engineering.

On 30th June 2012, he carried the Olympic Torch for London 2012 through the National Memorial

In 2014 the Johnson Beharry VC Foundation was set up to help youth in the UK and Grenada. 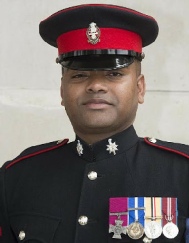