Place Of Death   At his home, L'Hotel, Verbania-Pallanza, north west of Como, Italy

P  Originally buried at Old Cemetery, Pallanza then moved  c. 1920 to New Cemetery and then remains moved to the Ossuray in May 1996

All seven of his brothers served in The Forces. His family steeped in military history.

During the assault on the Indore Presidency, he in command of five others attacked the enemy guns, as a diversion to allow civilians to escape to the safety of the residency. This action saving them from certain slaughter 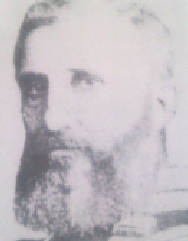