P  Plaque on bench on the High Street, Sandy, Bedfordshire

Serving with a gun crew from H.M.S. Diamond Captain Peel picked up a live shell from the newly arrived powder, before it could be stored and threw the live shell over the parapet just as it exploded. The next year led an assault on the redan. 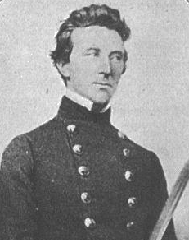