The announcement of award delayed as full story wasn't known until the only crewman to survive, Flight Lieutenant Harry King, was released as a POW camp in 1945 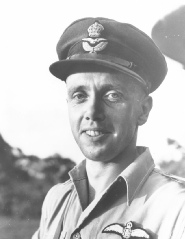