Taken prisoner in the desert, he was in a POW Camp in Italy, when the Italians surrendered, and opened the gates, and allowed them to walk to Switzerland 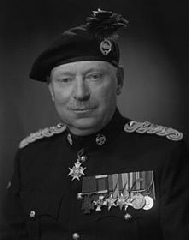