The Memorial headstone was  to him and his three brothers, all killed during WWII whilst serving with RAF 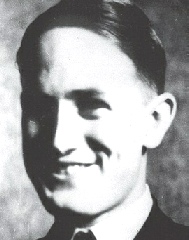