He was killed when the Fairchild aircraft he was demonstrating crashed, in Ottawa, Canada 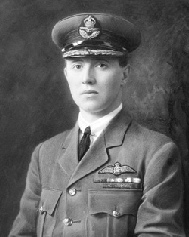