His brother John fought in the same unit, he helped to bury his brother the day after his VC action 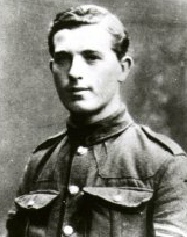