Having emigrated to Canada to work, when war broke out he walked 120 miles in snowshoes to a recruiting office 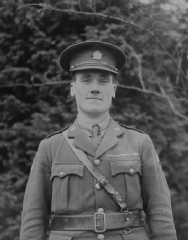