In the late 1930s a story was circulated, that Henry Tandey could have killed Adolf Hitler in 1918, the story started with Adolf Hitler himself, later to be found untrue 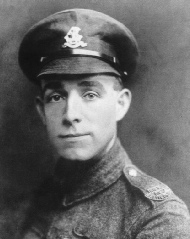