He was turned down from joining up due to lack of height. But restrictions were relaxed in late 1916 so was able to join 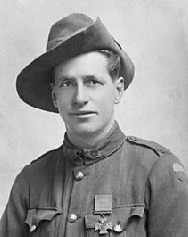