His father a carpenter made the wooden war memorial at Whitney-on Wye, Herefordshire, in his grief spelt his sons name wrong 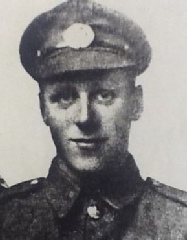