He was elected Unionist MP for Skeena, BC, and he sat in the Canadian House of Commons 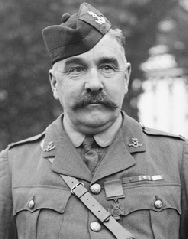