Learning his trade as a carpenter in Redhill, Surrey, he emigrated to Canada, were he joined up in the Canadian Expeditionary Force 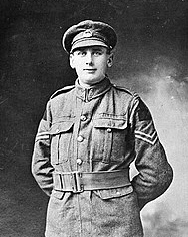