Place Of Death   near Peronne, France

VC Presented   13 June 1919 by the Governor-General of Australia, Sir Ronald Munro-Ferguson at Melbourne Town Hall, Australia to his father, Robert

In 1983 his family donated his medals to the Australian War Memorial, Canberra, for the Nation 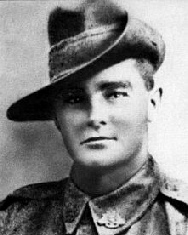