Suffered in 1918 from trench fever, which is transmitted by body lice, the bane of soldiers in the trenches 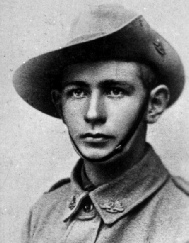