During World War 2, he was Assistant Provost Marshal in France, being evacuated at Dunkirk. He returned to France in June 6th 1944. 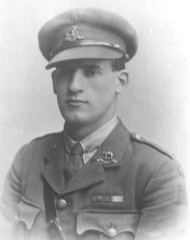