He enlisted in the Seaforth Highlanders at 16 in February 1915, but was too young to fight abroad, he finally got to France in July 1916 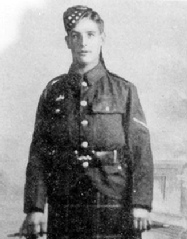