During his VC action, he was shot in the head, which left his brain exposed, but despite this, he recovered and lived on a further 47 years 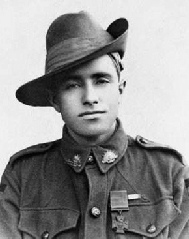