Headstone   Ashes   Plot/Grave no.   Copse near Columbarium (area since cleared)

Retired from the army in 1906, with the rank of Colonel 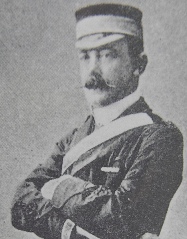